One of the famous quotes made by Abraham Maslow is: “If all you have is a hammer, everything looks like a nail”. Nowadays, organizational development consultants use this statement as part of their Power Point presentations to encourage creativity among employees. Unfortunately, the only genuine creative thing in most modern multi-global companies is the varied ratio between the amount of water and the amount of cream and sugar in every time a cup of coffee is being poured.

Coffee is sometimes associated with health issues like heart diseases. In early June 1970 Abraham Maslow visited his cardiologist. He sensed something was wrong and second level of his hierarchy of needs, that is, the security of his physical body began to be unfulfilled. Maslow’s cardiologist recommended him to run around the neighborhood swimming pool. On June 8, 1970 Maslow, who wanted to climb back his pyramid by fulfilling the second level of physical security, suddenly fell while jogging and died on the spot from a heart attack. His life’s pyramid of needs was destroyed forever. It was the final nail in his coffin. Maslow was not a healthy man.

However, years after he died Maslow have won some kind of eternal life and climbed back to the fourth level of his pyramid (self-esteem and achievement). Years after his death, every student in Social Sciences and Humanities knows the Maslow’s hierarchy of needs. In fact, his pyramid lives in every undergraduate student’s notebook or laptop or iPad. According to Maslow, we climb up the pyramid by fulfilling our needs: from the most basic first level of basic needs (sex, food, etc.) to the self-actualization of the highest level (moral and creative realization). The basic law of the hierarchical pyramid is the one can’t climb to the next level before he or she fulfills the previous one. Maslow thinks that reaching the top and fifth level of the pyramid (self-actualization) is almost impossible for most people. The motif of the unreachable peak of a pyramid is not an invention of Maslow: The classic German philosopher Immanuel Kant uses it when he describes the feeling of the sublime while viewing a work of art. Kant thinks that the tension between our practical wisdom and the free imagination creates the sublime. We feel like standing in the center of a pyramid, looking up and imagining its layers to infinity – despite the fact that our intelligence tells us that the pyramid is a one final object. Like Kant, Maslow pyramid’s edge has a mystical significance: his highest need, that is, man’s need to use his unique skills to live creatively is so rare that few, if any, can be reach that sublimity. 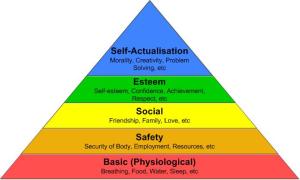 What makes us climb the pyramid of needs? modern German philosopher Martin Heidegger sees technology as the only force responsible to social and cultural changes in our world. Technology is the only factor that can create social codes and values ​​in such a way that they’re growing beyond our initial control. Technology is our ladder in Maslow’s pyramid. In order to define the essence of technology, Heidegger uses the German word “Gestell” meaning roughly the act of positioning in a frame. This active positioning describes the condition of modern man in light of the influence of technology: technology places humans in such a framework that they might feel as items in an inventory list. Although Heidegger insists that technology is an essential and positive way of being for us all, it has a dangerous side. By itself, technology is not dangerous but it may enslave the human world, make the person an item, and shape his destiny in her own curves and twists. Technology has a tendency to grab the hearts and minds and we have to be alert all the time and feel that we are always live on the edge of the abyss. Our ladder might break and we may drop to the bottom of the pyramid in such a way that we will even smash a reinforced concrete.

In the reality of social networking the term “Hyper Reality” is used by philosophers to describe the way in which the social networks weakens our social connections. Hyper reality is related to the fact that instead of dealing with the complexity of our identity in real-life, the social network allows us to introduce an improved version of ourselves. We feel the power of our hyper identity as we find ourselves often angry shortly after the disengagement from the social network. Real life requires persistence, tolerance, and sometimes even courage – all those qualities are not required in social networking life. Thus, our real life seems dull and tasteless during our first moments in reality. More generally: the social network life has no volume and real resonance which can stimulate our minds. In social networking life we are the global citizens of a world which has lost its power. To paraphrase Kant, our imagined reality has exceeded our practical reasoning and did not leave any free space to flourish. Nowadays, it seems that Maslow’s pyramid has turned upside-down. In order to climb our pyramid we start with our self-fulfillment online and as for sex, food and health: they will be fulfilled later when we reach the top. Actually, we climb this upside-down pyramid erratically: frequently we keep reaching its top and falling down over and over again. The hyper reality, self- fulfillment driven network keeps drawing us down all the time

Our situation reminds the hanged man’s position in the Tarot. The dramatic reversal in the hierarchy of needs is a period of time where any progress has a painful price and we see that hanged man needs his meditation in order to understand what happened to him. His Meditation can be seen in the card as he holds his hands back like he wants to understand how reality was turned upside-down for him. As the hanged man understands, we need to realize that this is a waiting period for us as well. As Heideggerian inventory items, we are forced to deal online with new and sometimes interesting forms of unemployment and laziness. Like the hanged man, we think we are socially connected to some network but our social needs are not really satisfied and we feel disconnected. This sense of alienation expressed by social networking interactions makes us feel emotionally empty, sometimes expressed by feelings of punishment and guilt. The hanged man is in punishment too. The tree’s pointed twigs surrounding his body are aiming to hurt him, so he can’t really move. Concerning technology, we recall Heidegger’s act of positioning in a frame and now we see that the hanged man is in an active frame that could hurt him at any given point. Modern man’s condition in the light of the social network hyper reality is like a person whose pyramid of needs has reversed. Like the hanged man he is surrounded by a dynamic network of limits and prohibitions.

The inversion of the pyramid of needs is not necessarily negative. We said that the social network engages us in fulfilling our highest need. Similarly, the hanged man head is located deep in a ground pit which could be interpreted as deeply connected to oneself. In addition, the social network encourages us to express ourselves and for example, the “Like” on Facebook could be interpreted as a sign to rise from the pit and stop meditating. After we post online, we are forced to wait for those “likes” and similarly the hanged man card symbolizes a progress with pain which leaves us emotionally empty. Heidegger argued that technology has a tendency to grab the hearts and minds and given this maneuver we feel that we are always standing near the brink of the abyss. However, most of us feel that this abyss is not negative at all. Fortunately or unfortunately, Silicon Valley’s server is a pit which knows all our history.

One response to “Tarot Philosophy: The Pyramid of Social Networking: Maslow, Heidegger and Tarot”